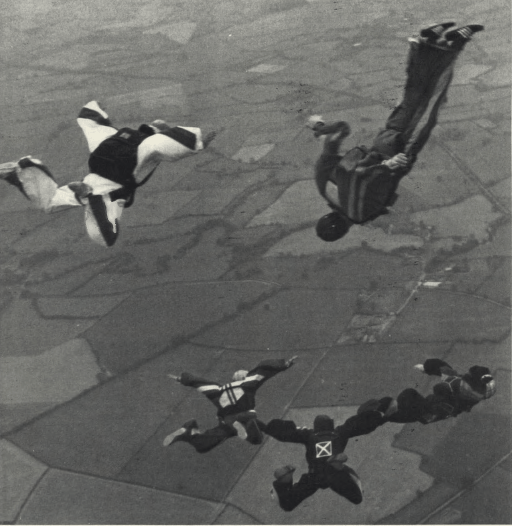 A nostalgic look back into our archives with an article from the April 1980 edition of Sport Parachutist with Lowe Puller and a plan for an interesting CRW jump.

Big Jake, Voice & Tits his beloved and the lugubrious Wilhelm Klaus are frenzied outa their minds by low cloud, absentee pilots, driven snow and intermittent attacks of parachute rot. After a few weekends of this they decide that boogie prospects over the winter are bleak so, flexible as ever, B.J. inclines towards canopy relative work as a better bet until the blue skies return, if ever. It is typical of B. J. that his first scheme is grandiose, bizarre even and what is worse involves me, his minder, as one of the four
to carry it out.

The proposal is that Big Jake, V & T, Wilhelm and me go up, pile out at cloud base and open immediately. Then, from the four cardinal points of the compass, we are to fly our squares head on at each other in a new version of centre pointing. At the critical distance we are to fire our assorted three rings, R-3s, two shot capewells and the like, go into freefall again, make a four man round, break off, dump our Safety Fliers and — we haven’t finished yet — with the Fliers we are to build a four man canopy stack and fly it in to a landing in the pit.

When word of this plan leaks to the Bee Pee Ay hysteria sets in. The Enn Cee Ess Oh does his conk at the very thought of it and foams at the mouth like a used up canister of shaving lotion, but to no avail. After all how do you stop B.J. in a thing like this if his intent is sufficiently solid? Little short of assassination will prevail. Mister Corker is consulted about the legal implications of such
unorthodoxies but finds naught in the legislation to debar the attempt. He announces with due solemnity that he will ground us all for life if anyone so much as breaks a fingernail doing it.

B.J. reckons that we will need at least five grand to keep it safe and the winter weekends roll on with the occasional hop and pop to keep us in practice with a few canopy hookups. It is during one of these exercises that I have a close encounter with B.J. which weakens my resolve for the big one. We hop out at three grand and the plan is for Big Jake to dock on top of my canopy then biplane it down to land in front of the admiring throng who are stamping around the dee zed to keep warm. The approach looks good with B.J. pumping up from ahead and below as we turn into each other, but suddenly the toggles slip from my hands which have gone numb without me noticing, just at the point when B.J. is on maximum brakes. My canopy shoots forward into full drive straight at B.J.’s ankles. Instead of lifting his legs to let me go by B.J. determined as buggery hooks both feet into my cells and peels two cells all the way back from the leading to the trailing edge of the canopy. I hear this ripping noise, see
the cell tops trailing out behind me like pennants and go straight for the three ring release. I fire it at two five hit a stable position and am just about to crank the reserve with my left hand when the maniac B.J. appears in front of me in freefall trying for a link up. I shout “ F— Off!” which is heard on the dee zed, turn, track and dump which provides a very hard opening at one grand. B.J. also under his Safety Flier observes the no CRW below one grand rule and we touch down close together by the pit. B.J. explains
in an ingenuous kind of way that as he knew I could of flown my main down with the peeled off cell tops he reckoned I was signalling him to practise for the big attempt, so he cuts loose and tries for a quick two man which he would of got had not I chickened out and pissed off like an enteritic bat. Opinions are split on the dee zed as to which was the more spectacular, B.J.’s swoop from his cutaway or my fear inspired track and its associated vapour trail. It nearly puts me off the whole thing but
Wilhelm and V &T pile me with booze, reassurances and in V & T’s case motherly caresses which stuff my nose between her heaving bazooms in such a way that I can hardly breathe any more. Finally I agree to go ahead with it on the grounds that B.J. will be even less controllable if I am not along.

Eventually one weekend the cloud base lifts grudgingly to five grand and the attempt is on. Old Grizz our regular pilot is away on winter vacation in his biplane so we hire Captain Nebulous to take us aloft in his high winged spamcam, seating five one of whom is a photographer with a zoom lens who will fly around us for air to air shots. In we go across the dee zed. The engine cuts and praying that my bottle won’t be gone for ever, with palsied limbs and steamy goggles I hop out last and open immediately.

There straight ahead is Wilhelm Klaus but he is pointing away from me. B.J. and V & T are head on to each other as planned both shouting at Wilhelm to turn his effing canopy. Wilhelm quickly comes round but he loses some height in the turn and to stay level with him I have to go on to front risers which causes the distance between us to close at an alarming rate. Big Jake and Voice ’n Tits meanwhile also have to go on to front risers to stay level with me and Wilhelm. All of this front risering puts a turn of speed into it which was not entirely anticipated. V & T seeing B.J. approaching like an express train shrieks in alarm, lets go of her risers and reaches for her R-3s. Her main course pops up in relation to B.J. and she goes clean through his lines cutting away as she does so. B.J. chops instantly and Wilhelm and me follow suit so close to each other that our momentum carries us together in a rough and tumble kind of dock which settles out level with B.J. who quickly makes it a three man. V & T has gone below us, tries briefly to come up then dumps her Safety Flier.

We see this square coming up at us, break off immediately and dump clear of it which puts V & T above us. B.J. and Wilhelm are closest together so they manoeuvre in until B.J. hooks Wilhelm in good solid dock from below and I am front risering in with my canopy nudging B.J.’s waist at two grand. V & T is spiralling down upwind of us as B.J. hooks his feet into my front lines. The three man stack is oscillating slightly as V & T makes her approach too fast. She is on front risers and again misjudges the canopy’s behaviour as she lets up. Her Flier leaps up and wraps itself round my face and body from behind causing instant
blindness and confusion, not to say fear. I hang onto her canopy with both hands at first then try to clear my face with one hand.

B.J. and Wilhelm are hurling imprecations from above in a steady stream of abuse and as some daylight appears I note with relief that my canopy and theirs are still flying properly. I clear more material away until I see that V& T’s canopy is totally collapsed and B.J. shouts that we are down to eight hundred feet so we have little choice but to land this mess with me hanging on to V & T
like grim death. V & T’s language this while has been even less ladylike than that wafting from above. “ For f— sakes Lowe keepa holda me till we land” she bellows. I comply with both hands locked into her canopy, feet and knees tight together for what is going to be an unusual landing.

B.J. is calling the height out as we descend. Wilhelm is doing a valiant piloting job keeping us away from the trees and telephone lines, informing us that his arms are nearly knackered. When B.J. from his forward leaning position sees V & T’s feet touch he is going to release me then Wilhelm will release him. In we go, one hundred feet, fifty, 14 thirty: “Release” yells B.J. and I tuck up hoping for the best. V &T’s canopy bundles up again over my eyes, with a thump I hit the deck, roll a few feet and come to rest, spent, winded and near to honking. The dee zed vultures come rushing over ready with I told you so’s and a stretcher, but apart from slight concussion V & T is okay. I feel like a steamroller has laundered me but manage to limp off to the club room with B.J. and Wilhelm who both got standups.

V & T makes the trip back sitting on the stretcher babbling inanely about how to make girdle scones, but she snaps out of it after a beer or two. The photographer has some really fine shots of our screwed up canopy stack. The new carpet in the Bee Pee Ay office is partly eaten by demented officials hearing the news and seeing the pictures on telly. B.J. becomes quietly and later riotously arseholed wanting us to re-enact the stack by sitting on each other’s shoulders in the bar with a curtain wrapped
round us, but he becomes totally legless before this can be done, much to the relief of Wilhelm, V & T and yours truly.

All we want to do is sleep and forget about it and eventually we do, wondering what the morrow’s mail may bring.

By Lowe Puller in the April issue of Sports Parachutist 1964 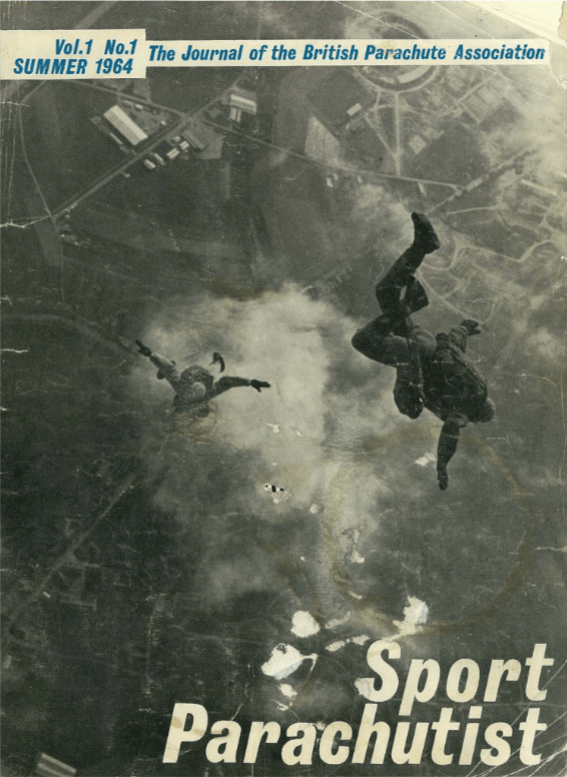