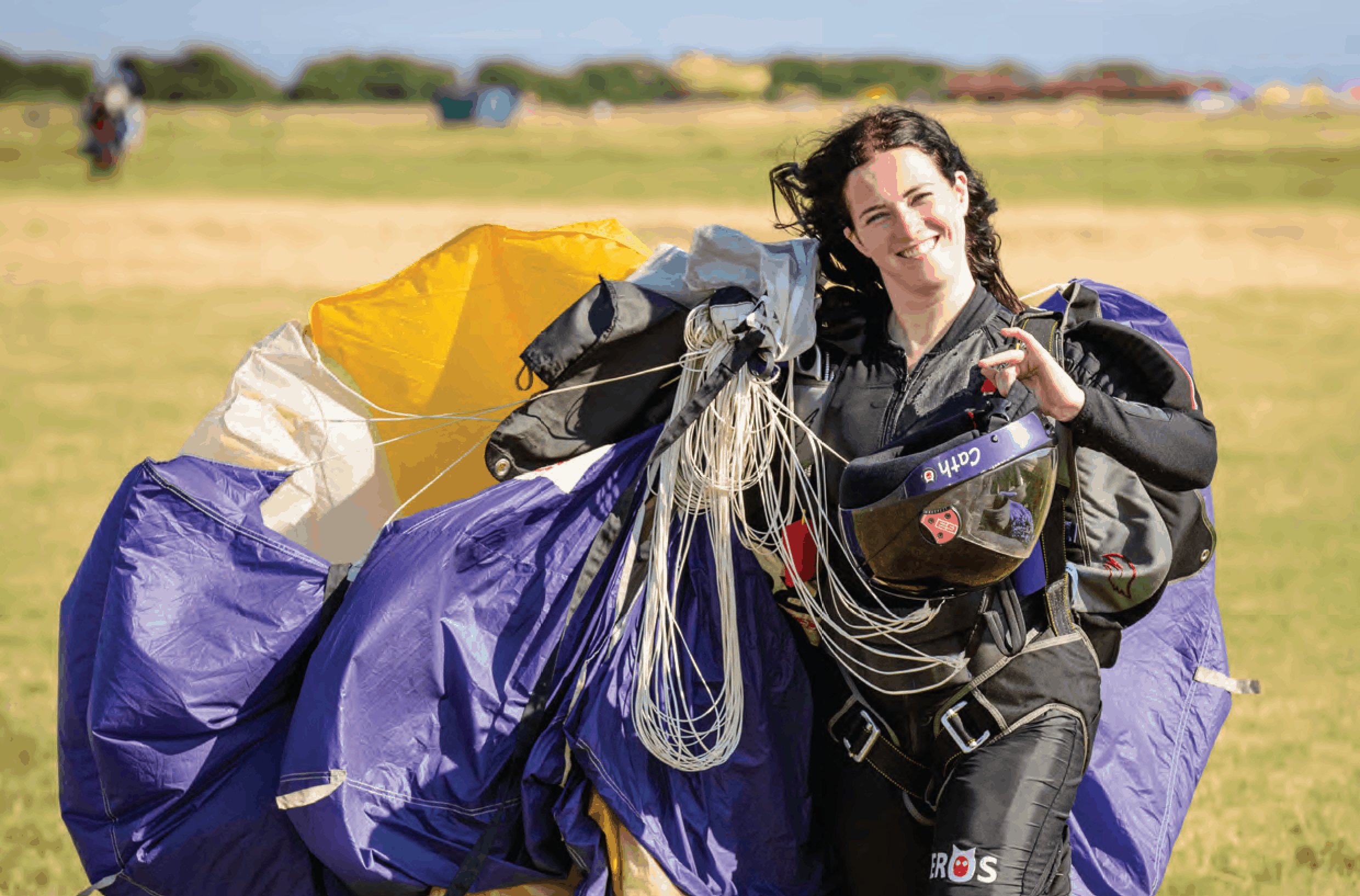 I have been coaching at Skydive Hibaldstow for a few years now and I’m often asked why I coach. It can be hard work, but it is so rewarding to me. I have had a lot of my own coaches invest a lot of time into my progression and I want to pass that learning on. When a student sees progression in themselves and goes home happy, it gives me a great sense of achievement. 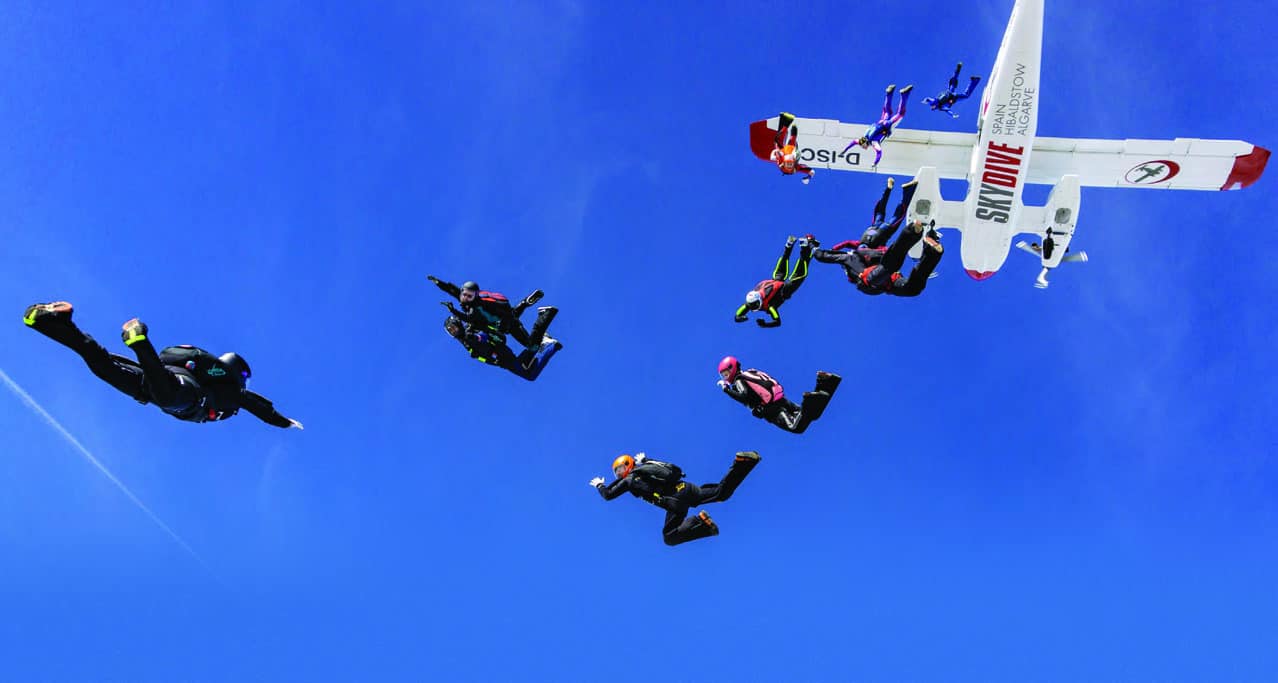 I started skydiving back in 2013 and immediately fell in love with bellyflying. A BPA FS Roadshow came to the drop zone when I had around 100 jumps and I was instantly inspired by the standard of flying and coaching. From that day, I became friends with Kate Lindsley – who became my coach.  Her passion for the sport, attention to detail and her talent were truly inspiring to me. The more time I spent flying with and learning from Kate, the more I wanted to become a coach like her.

I spent three long months working towards my coach’s rating and Stu Ferguson really put me through my paces. I’m pretty sure I cursed him in mid-air! Since achieving my coach’s rating, I have been determined to keep improving. In my work, I coach and develop people and I try to bring those skills to my skydiving too. As I got more into 4-way, I received coaching from the likes of John McIver and Joey Jones. I started to take bits from each coach and listened to their coaching styles to help me develop my own.

In 2017, I began to fly with Dennis Praet from Hayabusa and he has remained my main coach. Not only does he coach me on my flying, but he has helped me massively by coaching my coaching skills. I spend a lot of time listening to and learning from him while he coaches others. He has helped me learn how to communicate efficiently in the sky, which I feel is one of the most important things a coach can learn to do. I have been truly lucky to be able to fly with, learn from and be inspired by some of the best bellyflyers in the UK and the world. 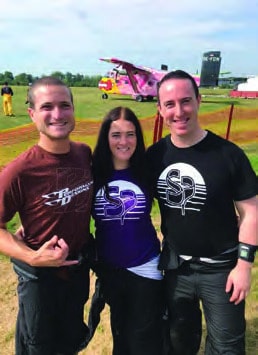 Beginning at the beginning

I always remind myself how I felt during my early days of skydiving – being petrified of falling to Earth, trying to take on board all the information I was given and then having to save my own life. It can be a lot for students to take in so, when I’m with my students, I always try to have a few things in mind. Firstly, I make sure I am clear about what they want out of the jump or day. What are their motivations? Is it to get the okay to jump with their friends, is it to learn about 4-way or is it to win a medal at the Nationals? I need to be clear of that so that I can tailor the aims of the lesson/session.

Secondly, I find out if they have any worries or routines that they feel they must do. For example, some FS1 students want to do a practice touch after exit. If this makes them comfortable, then I know it needs to be built into the lesson. If a student takes a long time to get ready for a jump, then I know how to plan. Then we come to the lesson. It must be clear what the aim is and why, what they need to do to make it successful and also what to do if it doesn’t go to plan. The lesson itself sometimes needs to be adapted depending on the student. Some people need time to think about the jump and to visualise, some need to understand the mechanics of how something works and others need to spend a lot of time on creepers.

Everyone has their own learning style and it is important that a coach is able to adapt to their student’s style in order to get the most out of the coaching. I have had a lot of fun coaching FS1 students and I feel so proud of my students, especially when I see them go on to do well in load organised (LO) groups.

I have learnt that just because someone can fly 4-way does not mean that they can coach it well – 4-way coaching is another skill in itself. I have been coaching 4-way for a couple of years now and I try to have a few versions of each move saved up in my head. Like I said earlier, some people learn differently so the way you explain something can be the key to the message sinking in. There are so many ways to do the moves and the blocks that I try to pick up as much as I can from my own coaches. What works for one team may not work for another, so it is important to me to have options to share. I think this is the best way to get the most out of a team. 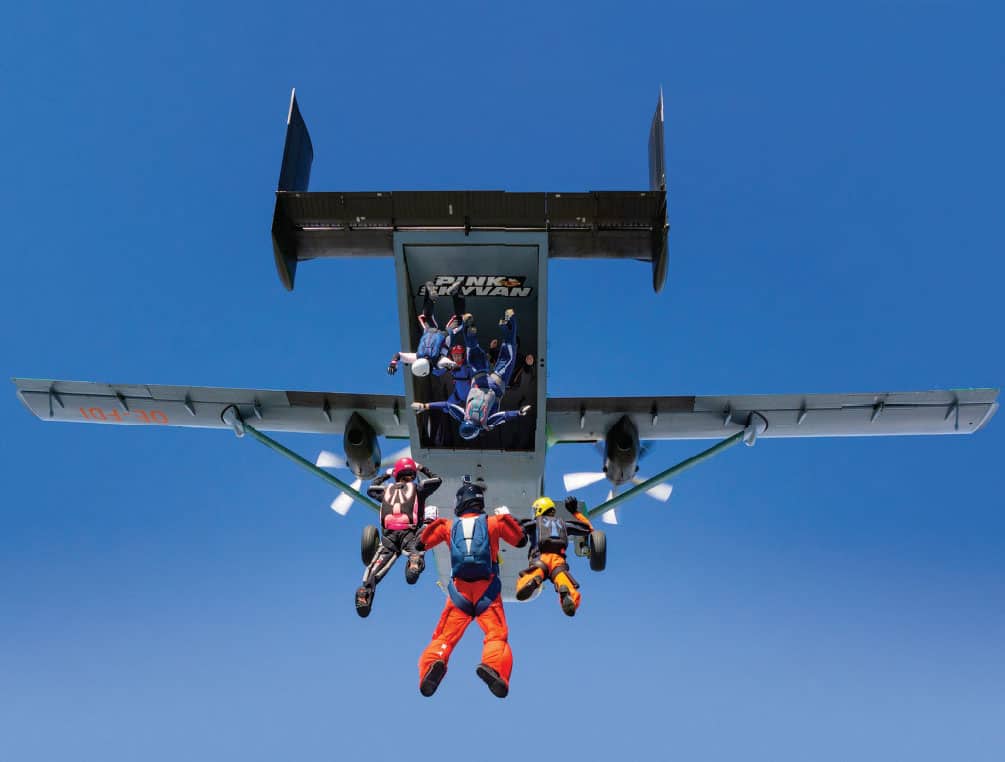 When I started coaching 4-way, I quickly discovered that it is not just about coaching the skydive. The coach also has to manage the people in the team and 4-way training can be stressful – especially during a competition. That’s why I try my best to learn about the people I coach so that I am able to get the best out of the team.

I have also spent a lot of time load organising FS jumps, which can be lots of fun. This summer, I was fortunate enough to be one of the plane captains for the PUPS (Parachutists Under Phorty Society) along with Ciaran McCartney and Ian Pedowitz. It is not often that I get to organise three-plane formations and what a week it was! The vision for PUPS came from Ronny Holen (Norway) and Brian Cumming (UK). Their aim was to bring a new generation of skydivers into big-way flying and ultimately be a feeder group into POPS. That’s why 120 skydivers from 20 nations descended onto Klatovy in the Czech Republic in August and, after a weekend of warm-up jumps, we started the record attempts. We initially planned a 39-way, because of course we wanted to keep the theme of less than 40. On the second attempt, we did it and held a 39-way for nine seconds!

Next, we went for a sequential. We used the FAI large formation sequential rules of having at least 35% of persons in the first formation release their grips and have all the grips on them released. None of the released grips included in this 35% may be retaken in the next formation. We set a two-point 45-way formation sequential record with 73% of the jumpers changing grips – what an achievement! Back to increasing our size, we then set the largest formation of skydivers aged less than 40 with a 48-way formation.

To finish off the event, we went for a full-break large formation sequential. For this type of sequential, 100% of the persons in the first formation must release all of their grips and all grips on them must also be released. We set a 23-way two-point formation sequential with a 100% break and we did this twice! This meant that 46 PUPS got the record and there were lots of happy puppies!

It is worth mentioning that, on the first jump the following morning, we were only a few slots away from upping the PUPS largest

formation to 60. All the records we set are unofficial records because PUPS is not an official FAI category, but all the FAI rules were followed when the records were set. The week also saw us host a Hawaiian pool and pizza party, balloon jumps and an inhopp!

We had some fantastic sponsors who made the event possible, including Sun Path, Cypres, Symbi Suits, XDream, PD and MadridFly – massive thanks! Are you a skydiver aged less than 40? Well, PUPS 2020 planning is already in progress and is set to be even bigger and better!