The overriding core value of British Skydiving is safety. Today, this is achieved by the rigorous application of comprehensive training, well-maintained equipment and carefully developed procedures coupled with personal awareness when we jump

Sixty years ago, before the formation of the British Parachute Association and subsequently British Skydiving, things were a lot different. The early pioneers of sport parachuting in the UK managed to get into a number of scrapes. Fortunately, most of these episodes had a happy outcome resulting in stories that have passed into legend. Bernard Green, joint founder of the BPA and its first Secretary, remembers one such occasion.

“It was in the Autumn of 1959 that Mike Reilly, Martin Griffiths and myself travelled to Sywell Aerodrome in Northamptonshire in order to skydive. On arrival at Sywell, we hired a Cessna 170. This aircraft had a single engine and a metal fuselage with high fabric wings that were supported by a ‘V’ strut that attached forward and level with the door. It was a four seater, but we removed the two rear seats and the door on the port side. We asked the pilot to fly as high as he could in one hour. This aircraft was produced between 1948 and 1956, and the climb rate was supposed to be 690ft per minute with a cruising speed of 121mph and a ceiling of 15,500ft. The sky was clear, but there was a chill in the air and we had thin RAF flying suits on over our normal clothes.

We sat on the aluminium floor behind the pilot. Mike got in first – I think he knew it was going to be draughty – I sat in the middle and Martin sat at the door to do the spotting and direct the pilot to the required exit point over the airfield. I felt quite cosy sitting in between them. We sat in silence because of the engine noise and wind howling round the cabin. It was getting really cold and the plane was not climbing very well with the pilot and three kitted skydivers on board. It was taking a long time to get to height. Martin kept poking his head out of the door to check on the wind direction by looking at clues like the airfield windsock and smoke from chimneys. I expect he was also looking at the views.

Suddenly, without a word or gesture, he rolled out the door. I’d had this done to me before as a strange joke – the joker leaving the others in the plane, causing them to miss the DZ. I was not going to fall for that and I quickly rolled out the door after him. This caused me to tumble and I found myself on my back looking up at the plane. At that moment, Mike’s hands, then his head and shoulders too, came diving out the doorway. To my amazement, his right hand then shot out and grabbed the wing strut and he hung on like a trapeze artist. I was not surprised at his speed of movement or agility because he was a superb athlete. I saw the plane veer violently to the left in a semi-circle before the pilot recovered and flew off with Mike still hanging on below the wing. What puzzled me was why he did it.

I had to turn my attention to watch what I was doing, so I rolled over. Below me, Martin was freefalling still and below him was, to my horror, a bloody great town, almost a city – it was Northampton. There were no open spaces to head for and it was pointless to open high and hope to drift away from the housing estates and huge factories that appeared to be everywhere below us. I opened my chute as I saw Martin going for his ripcord. Thankfully, the wind was light and we both had steerable 7TU chutes – we had cut out five narrow panels at the back of the chutes and at each end a large cut which enabled us to turn the parachute around in order to see where we were going.

I saw Martin land successfully on a road in a housing estate as I was over an enormous factory with a glass roof. I had heard that shoe factories in Northampton had glass roofs, but it has a different effect on the mind when you think you might be visiting them through the roof. I managed to land in the front executive car park, but left part of my parachute, the sleeve that encased the canopy to reduce the opening shock, on the roof. I did not bother to retrieve it, because I could not imagine anyone climbing 40ft up over glass to get it for me.

I walked over the road to Martin, who explained that he got so cold and stiff he fell out the door of the plane. I replied that we were both lucky that we did not go through one of those glass factory roofs and end up as stiffs. We got a taxi back to the airfield where Mike was waiting for us and, over a cup of coffee, he explained that as his head cleared the door he saw the town and grabbed the strut. Then he held on for more than two minutes while the pilot flew back to Sywell. That was nearly five miles at 120 mph, then he dropped off. I believe that the area that Martin and I landed in was Moulton Park.” 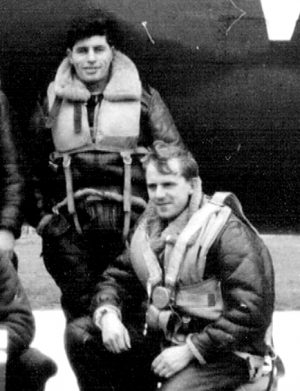 Mike Reilly and Bernard Green filming The War Lover in 1962 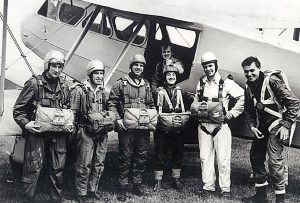