Whistle blowing can be used as an early warning system or when it’s recognised that appropriate actions have not been taken. This approach or policy is adopted in many different walks of life.

It is about revealing and raising concerns over misconduct or malpractice within an organisation or within an independent structure associated with it.

Anyone with concerns can contact our Compliance Officer in the strictest of confidence: complianceofficer@britishskydiving.org 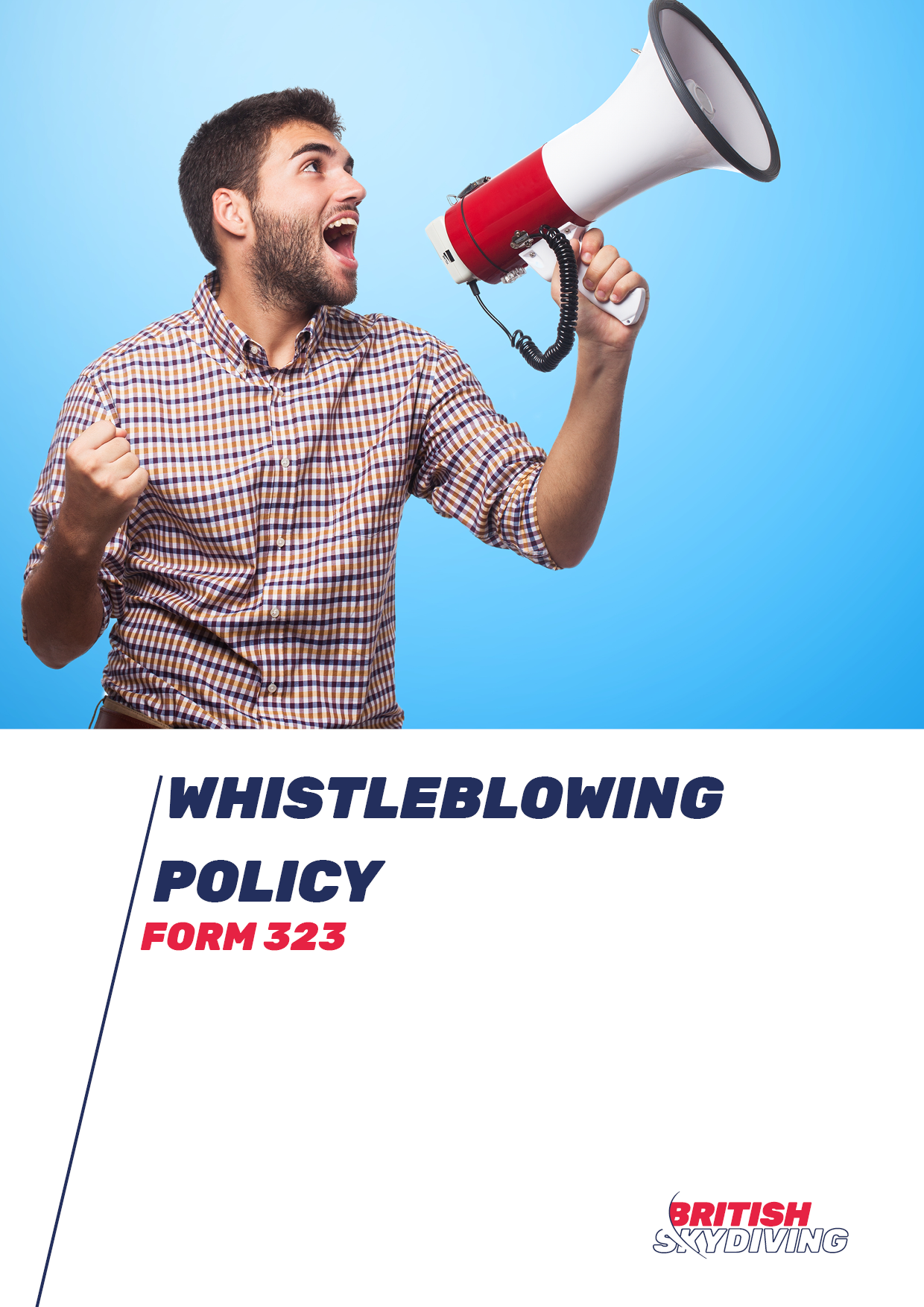 ‘Whistle-blower’ is a term commonly used to describe a person who alerts an authority to acts of wrongdoing, usually by someone within the authority’s jurisdiction. Whistle-blowers are witnesses to a malpractice and must not be penalised for any disclosure of information, in fact certain categories of whistle-blowers are protected by the law’. British Skydiving is committed to encouraging a culture of openness: to uphold the reputation of the organisation, maintain the sport’s and the public’s confidence, and to protect its members (i.e. skydivers, judges, instructors, drop zones, staff, officials, volunteers etc.).

It is in the interests of the sport and its membership that individuals with genuine concerns are able to raise them in a confidential and effective way. This policy outlines the mechanism by which serious concerns can be lodged with British Skydiving and addressed appropriately. Anyone approaching British Skydiving, in good faith, with information regarding matters of wrongdoing, such as fraud, misappropriation, bad practice in child (and/or vulnerable adult) protection or safety, discrimination or breach of codes of conduct, by staff (including contractors) or volunteers working for British Skydiving, will have the matter dealt with in an appropriate manner with a duty of care to all those involved. Where the initial investigation identifies there are issues or concerns that are covered by other policies of British Skydiving, for example a safeguarding or employment matter, the complainant will be advised of this and the matter will be dealt with under that policy.

If you discover any wrongdoing, including bad practice or abuse you should report it to British Skydiving’s Compliance Officer using any of the following methods:

Your concerns will normally then be considered by the Compliance Officer in the first instance who will investigate the matter further. Depending on the outcome of the investigation, remedial action that may include disciplinary proceedings may be taken against the wrong doer or the matter may be referred to another authority. Where any such action is not in the power of the Compliance Officer, they will then make recommendations to the Council to take appropriate further steps.

Any investigation will not, at any stage, be carried out by any person against whom allegations are
made, and details will only be shared with those individuals who are considered vital to the effective
functioning of any investigation.

Enquiries will be undertaken promptly, although more complex matters may require a longer and more thorough investigation. You will be advised of the outcome of any enquiry and any remedial action taken. If the issue is not resolved in a satisfactory manner by the staff member, or if the concern relates to the Compliance Officer, you may raise the matter directly with the any member of the Board – including specifically the Chair, Vice Chair or Treasurer via post to:

The relevant Council Member will make enquiries and, if appropriate, investigate the matter and take any remedial action to rectify the situation (which may include instigating the Disciplinary Procedure or passing to an independent member of the Council if appropriate). Investigations will not be carried out by any person previously involved in the matter and at no stage will they involve any person against whom allegations are made. Again, any investigation will be done promptly, although more complex matters may require a longer and more thorough investigation. You will be advised of the outcome of any enquiry and any remedial action taken. In some instances, particularly those involving child safety, it may be necessary to refer the matter to an external authority, for example the police. If this is the case both the complainant and the person against
whom the complaint has been made will be notified of this, unless British Skydiving is prohibited from doing so by law or at the direction of the external authority.

Any person approaching British Skydiving with genuine concerns will not be disadvantaged or discriminated against in any way because of the disclosure. However, British Skydiving will take a serious view and act accordingly, including taking disciplinary action against appropriate parties, should it be found that the allegations have been intentionally portrayed as untrue or have been raised maliciously. Individuals are therefore encouraged to put their name to any disclosure.

Allegations raised anonymously may be investigated depending on the seriousness of the issues raised, the credibility of the concern, and the likelihood of confirming the allegation from attributable sources. Where possible confidentiality will be maintained, although it must be stressed that in serious cases of fraud and in cases of child protection it will be not always be possible to maintain strict confidentiality if the concerns reach the investigation stage.

If you have any safeguarding concerns about a member, please visit the dedicated Safeguarding section.