The history of parachutes may date as far back as far as medieval times. Early parachute-like devices may have been used for stunts to entertain guests at court ceremonials in China as long ago as the 12th century.

In Italy in 1483, Leonardo da Vinci imagined a design for what we would now call a parachute in a sketch in the margin of one of his notebooks. The design consisted of sealed linen cloth held open by a pyramid of wooden poles about seven metres long. His accompanying note read: “If a man is provided with a length of gummed linen cloth with a length of 12 yards on each side and 12 yards high, he can jump from any great height whatsoever without injury.” There is no evidence that da Vinci ever constructed such a device.

The next relevant historical reference can be traced to over a century later. In 1595, a Hungarian mathematician living in Italy, Fausto Veranzio, put forward the idea of a ‘fall breaker’. He claimed to have made a number of successful trial jumps from a tower in Venice. However, there is no evidence to substantiate his claims.

It was the French aeronaut Jean Pierre Blanchard who claimed the invention of the parachute in 1785. ‘Parachute’ is a French word derived from the Latin ‘para’ which means ‘against’, and ‘chute’ which is French for ‘fall’.

After successfully trying out his parachute on animals, including his own dog, Blanchard personally made several successful jumps. Then in 1797, another Frenchman, Andre Jacques Garnerin, made the first parachute descent of about 3,000 ft (914m) from a hot air balloon. He used a basket under an open parachute made of silk stiffened with supporting poles. Early parachutes always had rigid frames and looked like big, open umbrellas. These parachutes were used as a means of emergency escape from hot air balloons, which were sometimes difficult to land safely. 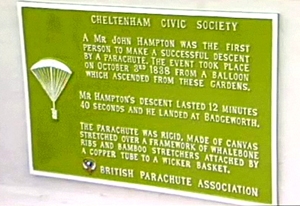 The plaque on the Bandstand in Montpellier Gardens, Cheltenham, commemorating John Hampton’s parachute descent from a hot air balloon in 1838

In 1838, John Hampton, an Englishman, made the first successful British parachute descent. He jumped from his hot air balloon near Cheltenham, Gloucestershire, from a height of about 9000ft (2743m). John Hampton’s parachute was made of canvas over a framework of whalebone ribs and bamboo stretchers, attached by a copper tube to a small wicker basket. After his triumphant jump, a delighted Mr Hampton is reported as telling how his descent began so rapidly it ‘knocked the breath right out of me’. Then his parachute inflated fully and he drifted more slowly to the ground. His descent lasted 12 minutes 40 seconds and he landed with only a scratch to his forehead.

On the 170th anniversary of John Hampton’s descent, 3 October 2008, British Skydiving Council Members Paul Applegate and Andy Scott were delighted to unveil a plaque (pictured) co-funded by Cheltenham Civic Society and British Skydiving, on the bandstand in Montpellier Gardens, Cheltenham, to commemorate the event. 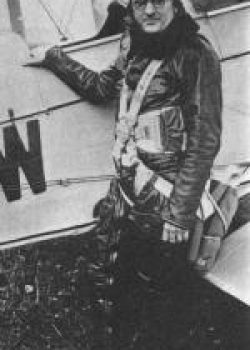 Parachutists – along with hot air balloonists and early aviators – often entertained the crowds by performing at aerial circuses and exhibitions.

The next advance in parachute technology came with the invention of the limp parachute which had no stiffening to hold it open, and a trapeze bar instead of a basket. The first limp parachute descent was made in 1897 by an American, Captain Thomas Baldwin, who also invented the first parachute harness. In 1890, Paul Letteman and Kathchen Paulus, German exhibition jumpers, invented the method of folding or packing the parachute in a knapsack worn on the back before its release.

A patent was granted in 1911 to the Italian inventor Pino for a flexible parachute, including a pilot chute. An American, Leslie Irvin (1895-1966), made the first ever freefall parachute jump (skydive) near Dayton, Ohio, USA, in 1919 using his own hand-operated chute. Irvin’s design revolutionized parachuting and gave birth to a new sport. He became a stunt-man for the fledgling Californian film industry, for which he had to perform acrobatics on trapezes from balloons and then make descents using a parachute. The Irving Air Chute Company began operations in Buffalo, New York, at around that time, and is still trading today as Airborne Systems. 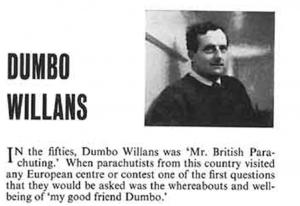 Dumbo Willans, born in 1918, was celebrated in an article in the second issue of the BPA magazineSport Parachutist published in autumn 1964. His life story is summarised in this obituary published in The Guardian in 2004.

During the First World War in 1916, an Australian pilot on the Russian front made the first escape by parachute from a disabled aircraft. In the following year, both the Germans and the British began to equip their air forces with these life-saving devices. By the summer of 1918, parachutes were in wide use on all fronts. The parachutes used during the First World War were, by modern standards, makeshift contraptions. But they proved their worth and were the basis for experiments in design that began immediately after the war – and have continued ever since.

The development of aviation and parachuting between the wars still carried a barnstorming image.

In World War II, when Britain faced the threat of invasion in its darkest hour, Prime Minister Winston Churchill sought the means to strike back. In 1940, he instructed the War Office that ‘We ought to have a corps of at least 5,000 parachute troops’. This led to the development of British airborne forces. In February 1941, the first airborne operation took place, when 38 men parachuted into southern Italy. In August 1942, all parachute battalions became battalions of The Parachute Regiment.

After World War II, there were plenty of surplus parachutes and it was at that time when the then current and former military parachutists began to enjoy and exploit the potential of parachuting as a sport. The nicknames of some of the pioneers of the sport, such as ‘Dumbo’ Willans [after the flying elephant in Walt Disney’s 1941 animated film] and ‘Dare’ Wilson, say it all. Using ex-military parachute equipment, they experimented with the aerodynamics of their parachutes by cutting holes in them to improve steering and flight. Gradually, as competition became fiercer, parachutes were developed specifically for sporting use.

Their efforts paid off. Parachuting was accepted as an aeronautical sport by the Fédération Aéronautique Internationale (FAI) – the World Air Sports Federation – in the 1950s.

Today, whether a first-time student or a top competitor, the parachute will have been designed specifically for that use within the sport.

Synthetic fabric has replaced the famous parachute silk of military parachutes during World War II. Modern ‘ram-air’ square parachutes have top and bottom layers of specially coated nylon, connected by airfoil-shaped fabric ribs to form cells that fill with high-pressure air from vents on the leading edge. They are aerodynamically designed for optimum flight performance and canopy control.

There are several types of competition skydiving, including aerial formations or aerial gymnastics performed in freefall, and speed skydiving, as well as formations under canopy, canopy piloting, and the classic disciplines of freefall style and accuracy landing. The sport continues to develop, and in 2015, the new discipline of Wingsuit Flying, also known as Wingsuiting, was formally recognised.

The term ‘skydiving’ is sometimes used interchangeably with ‘sport parachuting’. Technically, skydiving refers to controlling one’s body in the freefall part of a descent, before the canopy is deployed. The freefall part of a descent can be simulated in a wind tunnel in indoor skydiving, which is a valuable training aid for the outdoor sport as well as a growing sport in its own right. 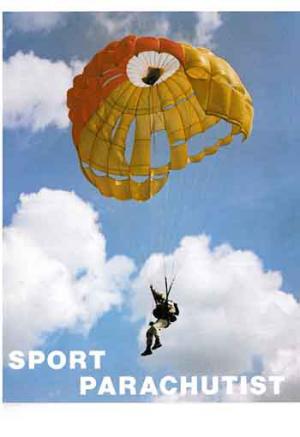 An issue of the BPA members’ magazine Sport Parachutist from the 1970s, featuring an image of then National Champion John Meacock on the cover.

The role of British Skydiving

An Introduction to UK Parachuting History from British Skydiving on Vimeo. 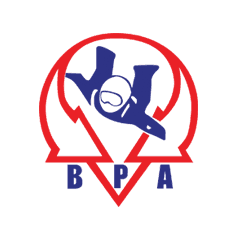