Parachuting in the 80s

The below is an article written by Dick and supplied to the editor of Skydive the Mag for the 50th Anniversary of the British Skydiving in 2011.

Never having been in anything larger than an 8 way just once, never having entered competitions and just being a mediocre jumper, there are no stories to tell on the lines of those in the latest mag.

The only thing achieved was being a bit of an inventor of the Slots parachutes, Parashapes and the Parachute Landings Simulator, all now long since forgotten. Being entirely round canopy orientated for half of my time in the sport I sometimes thought about the radical performance difference between flat circular canopies and the Lemoigne type such as PCs and Papillons. One day whilst such idle thoughts were present I was sat at work in front of a loudspeaker with an expanded metal front cover like the following image. 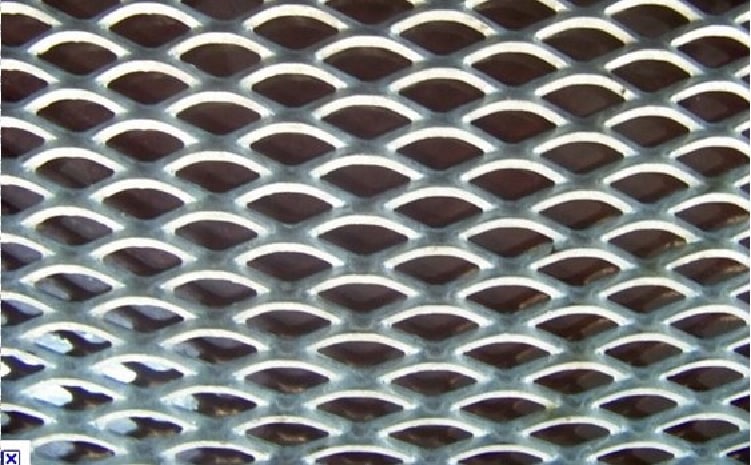 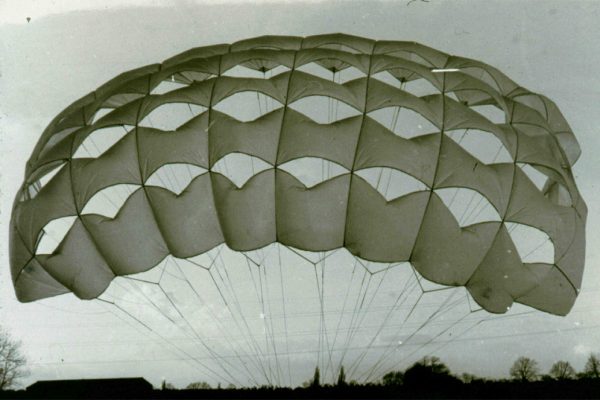 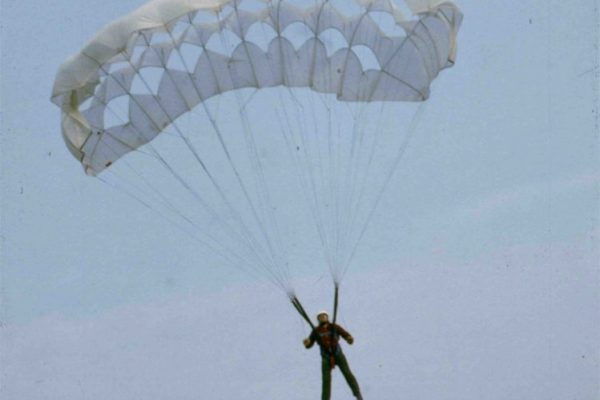 The first full size canopy, Slots 1 shows the similarity to expanded metal. The idea for a new type of parachute was born. Why not make a single layer square parachute with lots of drive slots all over it which you can’t do on a round?

First off, make a small model to see how that would work. It did, so next try to calculate how big it would need to be to carry me. Now ram air parachutes inflate to their actual size, but rounds do not. For instance a 28 foot diameter flat circular is only about 19’ 4” diameter inflated, this why I needed to know how big to make it.

Not having access to a wind tunnel, one night in the dark I lashed a pole onto my car roof rack projecting sideways some 6 feet. The model was tied to the end of the pole whilst I drove and my son took photos by flash. This eliminated all back ground and gave the result required. The photo clearly showed the angle of the lines and since their length was known, the inflated size could be calculated.

Never having made a parachute before and not knowing if it would really work, Slots 1 was built of some very suspect cheapo rip stop and as such did not last long, six panels blowing completely out on a terminal opening.

Slots 2 followed being quite a bit smaller and made of a fairly reasonable rip stop material that survived all the terminal openings it was put to.

All the three Slots canopies were made with one piece panels from stabiliser to stabiliser, though reinforced with tape where needed. These long panels are parallel lengths of material requiring no fancy shaping.

Slots parachutes were never developed to their full potential, there was no point, Ram Air parachutes had taken over. The invention of this type of parachute was successfully patented though that has long been allowed to expire. Before being allowed to live jump home made parachutes every stage had to be reported to the STC and all early jumps were on a cut away rig. Later Slots 3 did get approval to be used as a main parachute by C licence holders and above.

Jim Crocker who was then the STC chairman arranged a £350 development grant paid to me by the BPA in recognition of the work carried out. Only two models of Slots 3 were built though after all these years, four more are under construction, one in the UK, one in the USA, another in Canada and the last in Venezuela. The Barry Jeffries one belongs to a German skydiver, mine is on loan to Henny Wiggers at Paracentrum Teuge in Holland. 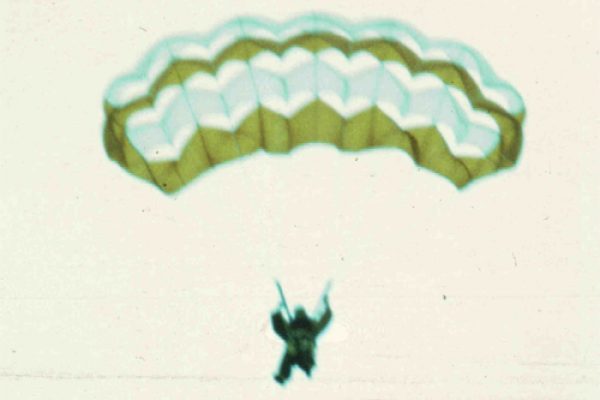 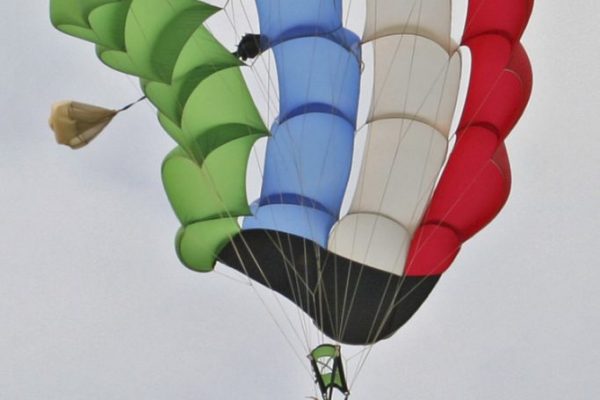 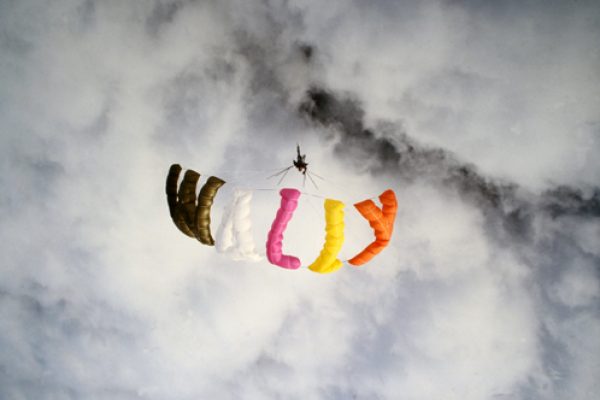 After the fun of designing, building and testing the Slots range of parachutes, the decision was made to try something completely different, Parashapes.

Leo Dickinson and Peter Reynolds had just launched their first Wally Gubbins video, so I wrote to Leo, offering to make a WALLY parachute. Not a parachute that said Wally on it, a parachute or perhaps five parachutes in formation that said WALLY.

WALLY was designed to be steerable with the vain hope that it might be landed; this is why it was built to be read from below. On the first live jump, a pull on the right toggle did result in a slow shuffling right turn. A pull on the left toggle caused utter confusion with all five latter thrashing about. Cut away time. After sewing all the drive slots shut, two more live jumps confirmed that cutting away was a good idea. WALLY was ready for Wally Gubbins. Only two more live jumps were made, enough for Leo to get all the filming required from above, and for Pete Reynolds to get the amazing opening sequence from a chest mounted cine camera.

Parashape 1 (Wally) was followed by Parashape 2 The Olympic Rings. This idea was conceived sometime before the 1988 Olympics at Soel, when we heard the Americans were rehearsing for making a free fall formation Olympic Rings. Could we go one better and make an Olympic Rings Parachute?

In order to get the exact shape, the rings have quite a large diameter but very little width so a massive parachute was required to support a man. My first live test was a bit disappointing, it opened, it supported me but rather than looking like the Olympic Rings, it looked like a bunch of coloured sausages.

Modifications were made with the result that the rings tended to be oval, but constantly changing in the orientation of the ovals. A further modification of adding radial lines across each ring, rather like the spokes in a bicycle wheel gave much better results.

The rigging of the Rings is rather complicated, it had 168 primary lines attached to the canopy, 40 secondary lines and 20 tertiary lines. Two extra lines were needed that acted as both secondary and tertiary, and there were also 50 radial lines. The lines were very very long, the had to be for such a large canopy. This in turn lead to a near 50% malfunction rate caused by one ring opening before the others stretching those lines and allowing the still unopened rings to pass through. All bar one live jump was a cut away jump. The resulting tangle of five rings and 280 lines usually took some five hours to undo, so progress was slow, never more than two tests per day. Finally some decent pictures were obtained, then disaster.

When Leo offered his footage to the TV company, the first thing they asked was “Do you have permission to use this copyright logo”? A hasty letter to the British Olympic Committee cleared things up, they even told me so long as no more than 12 were made, they would turn a blind eye. By this time it was too late, the TV Olympic schedule was fixed, we were not included. 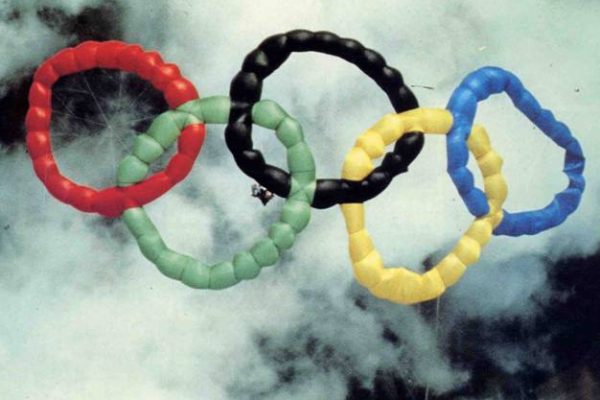 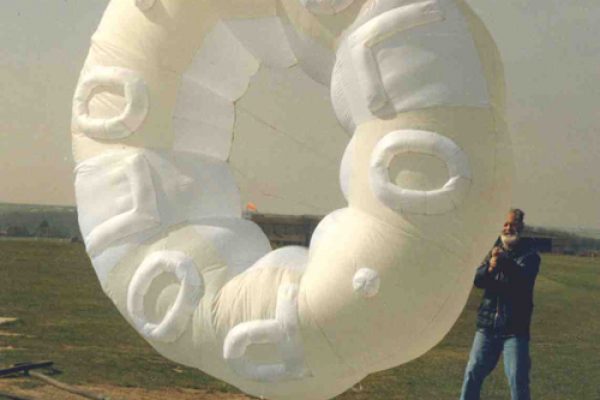 After making two uncontrollable un land able Parashapes I looked for a shape that would be easy to recognise and controllable. OXO was a thought because read the same from back or front from above or below, but too similar to WALLY.

POLO, the mint with a hole was a nice idea so a 6’ diameter model was made to test the lettering required.

Not wanting another copyright problem, permission was sought from Nestles who would not give it, but did send a nice large complimentary pack of POLO mints.

The next idea was the Volkswagen logo for which the British concessionaires did grant permission so it became Parashape 3. After it was built, jumped and photographed pictures were sent to VW.

Some time later a letter was received, offering to fly me to the Ulster Air Show which they sponsored, put me up in a hotel and let me jump the VW Parashape at the show. On the day of my daughters wedding.

The VW logo was a safe controllable but very slow canopy, always landing somewhere on the DZ, twice even in the pit though never on the disc. After a lot of expensive fun, that was it, finish.

Another invention was the Free fall Simulator, but that was featured in a recent Mag under the heading of 25 years ago (if I remember correctly).

Now at 76, Parachuting is just a memory, but I’m still busy “inventing” and making things as a volunteer for Remap, a National Charity that makes one-off aids for people with disabilities if no such suitable aid is available commercially. So far 82 people have my aids, every one tailor-made for them. 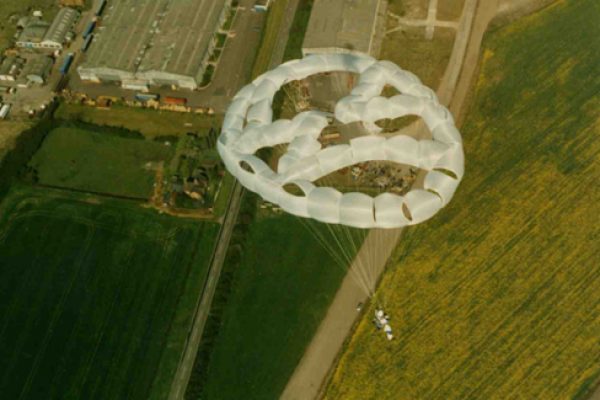